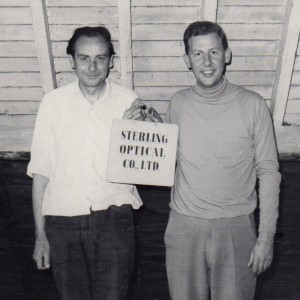 My story starts over 50 years ago here in Croydon. Optilabs evolved from a company that was originally making, and selling, frames and lenses to the trade. As the market gradually changed it became clear to me that we had a unique opportunity to sell directly from our labs in Croydon to the public. This allowed us to not only provide a much faster delivery time, but also produced glasses at a very competitive price.

I’m a firm believer that everyone in business has a ‘eureka’ moment and mine came in WH Smiths! We were considering manufacturing polarised fishing glasses and I went to WH Smith’s and to buy some magazines in order to get some ideas. With my arms full of fishing magazines a man said to me “I see you are a fisherman as well”. As I told him the reason why I was buying the magazines, he mentioned he was a retired bank manager, specialising in offering advice to small businesses. When I explained about our factory manufacturing prescription lenses, he immediately hit on the idea of making polarised fishing glasses to individual prescriptions. That was the moment!

A few weeks later I put a small advertisement in a fishing magazine. On the day of publication, the phone rang with an order at 8.15am and since then it hasn’t stopped. We soon realised there were many other sports where bespoke prescription frames and lenses could not only enhance performance, but also give much greater comfort. So now the story goes on. As well as offering help, advice and a customer service that is second to none, we continue to sell hundreds of sports glasses a month all over the world.

Our ethos is the same today as it was the day we started, and it is really very straightforward. We want you to have the best vision possible. That’s it! ‘Simples’ as the furry meerkats on the TV would say! 

Getting the best out of your eyewear and protecting your eyesight for as long as possible is one of the most important things you can do – whether that’s with your everyday glasses or you sports sunglasses. That’s the reason why we are passionate about the quality of our lenses, the lens manufacturing process – which is all done in-house – and our customer care. We want you to enjoy your glasses and your sport as much as possible and that’s why we offer a full refund if you have any problems within the first 14 days.