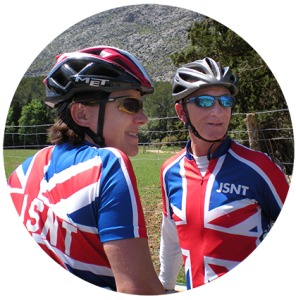 At Optilabs, we’re often treated to stories of sporting feats that really put our glasses through their paces. But, to say endurance racers Brian and Stacey Welsh have tested our glasses to the limit, is something of an understatement. Since 2008, they have both been wearing Optilabs sports glasses, and have racked up an extraordinary number of miles in competitive racing – both individually and as team. And there is no signs of them stopping yet!

Brian is a qualified sports coach, and has been a long distance racer since 1997. He has been one of the UK’s top Triathlon coaches since 2000, when he started JSNT (Just Sweat No Tears) and now coaches ultra cycling and running, as well as a whole range of triathlon events. Brian has competed in long distance races – both supported (with a team) and unsupported (solo) – including 5 times in the 4800km Race Across America (RAAM), the 2150km Race Around Ireland (RAI), the 3500km London to Istanbul, and the 6800km Trans America. On 30 September 2017, Brian will mark 20 years of Ironman triathlon competitions, when he competes in Barcelona. It will be his 25th Ironman event!

Stacey has been long distance racer since 2007, when she competed at the Lanzarote Ironman. Two months later, she took part in the famous Paris–Brest–Paris cycle race, and the day after, drove from Paris to Hamburg to compete in the World Triathlon Championships representing GB. Respect! At the Norseman Extreme in 2008, Stacey was the fifth female competitor to cross the finish line, and this came shortly after winning the RAAM as a mixed two-person team with Brian. The pair – wearing Optilabs – became only the second team ever to finish this challenging race within the time limit. Stacey has now completed four Norseman Extremes and nearly 20 Ironman triathlons!

Right from the start, Brian and Stacey’s Optilabs glasses have been a vital part of their sports kit. After their epic RAAM win in 2008, we asked them how they got on with their glasses. They said, “During the race, the glasses put up with a fair amount of abuse. We don’t have the time, nor the facilities, to treat them delicately but they performed really well and never let us down. The are so comfortable and are a joy to use. We know we can rely on them”.

Earlier this year, nearly 10 years on from when we first met them, Brian completed the gruelling, solo Trans America race – starting in Astoria, Oregon, and finishing nearly 4300 miles later, in Yorktown, Virginia. His beloved pair of Optilabs SPRINT glasses – complete with customised nose piece – were with him all the way. “The glasses were amazing, and practically unbreakable. They just work – and that’s what you want when you are going somewhere where you can’t replace anything.”

So what’s next? Following a back injury that has prevented Stacey racing since 2015, she has now fully recovered and is gearing up to compete, with Brian, in 2018’s RAI (Race Around Ireland). The pair are attempting to be the first tandem to ever complete the course. The RAI covers 2150km, with a muscle-burning 30,000m of climbing. Brian also plans to compete in 2018’s Race Across America, and is going for the record in the 60+ ‘four-person mixed’ category. Stacey will be Crew Chief for this race. Both plan to either do the RAAM in 2019 on a mixed tandem, or America’s equally gruelling Tour Divide on mountain bikes.

Good luck to both! We look forward to receiving updates – and of course, how their Optilabs sports glasses are meeting the challenges.