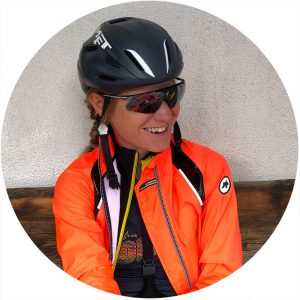 Emmie Collinge is a freelance cycling journalist and photographer. In her Facebook profile she describes herself as a mountain runner, occasional road runner and a long-time cycling addict. Which all sounds pretty modest until you realise Emmie won silver for Team GB at the World Mountain Running Championships in 2015, followed by gold at the European Mountain Running Championships in 2016. Emmie has also set a cycling record for the ascent of the Stelvio and achieved third at the infamous Taiwan KOM.

“I started running as a youngster, and competed for England as a junior in cross-country races in Europe. I took a break while I was at university but I started to love sport more and more again when I lived in Northern Sweden. The landscape was fantastic for running and each time I went out I ventured further into the wilderness. I ran my first mountain race when I moved to Switzerland in 2014 and it was then I realised that not only did I love running up mountains, but I am also fairly good at it. In the autumn of 2016, unfortunately injuries caught up with me and I’ve since shifted my focus and started incorporating more cycling. I’ve now reached a blissful state of equilibrum – whereby my running is actually going really well and the cycling too.”

Emmie came to Optilabs in the Summer of 2018. She has a strong prescription and was keen to find some great-looking glasses that would match the style and personality she is reknowned for. Emmie chose the FLIP sports pack for her day-to-day running/cycling and the more rugged Blackbird for extreme mountain biking.

After six months of putting her Optilabs glasses through their paces, we caught up with her, to get her thoughts.

“Finding great-looking glasses when you have a prescription is not easy – especially when it is as strong as mine. I never thought I’d get the chance to wear cool sunglasses like every other cyclist in the world so I’m really glad I’ve found Optilabs. I truly love my FLIP sports glasses. They fit my face really well and are light and comfortable. Having the choice of the clear and orange shields to accompany the mirrored shield is something I really appreciate. The orange really helps to boost my vision when the weather is dull and grey.

Initially I was a bit dubious about the visibility of the prescription insert underneath, but now I’m used to it I don’t care at all. In fact, it’s SO useful to be able to flip the main shield up when it’s getting dark, or I’m riding with a light on, and still be able to see really well!

My Blackbird glasses are completely different but I love them just as much – if not more. In terms of panache while gravel riding, they’re definitely up there in the style stakes. They’re a bit heavier than the FLIP but the large lenses give me such great vision. The side shields give good protection but also help to block out any visual distractions. They also look great with my helmet 😉

The polarised lenses give great definition too. They really do make everything so much sharper. The air is really clear where I live in the Italian mountains and the sunlight is really strong. The grey lenses are nice and dark. They block out all the glare so I am not squinting.

I’ve now told many people about Optilabs and can genuinely say your prescription sunnies have changed my life!”

This year Emmie is will be taking part in a number of road running events and also targetting the European Mountain Running Championships in Switzerland. In cycling, she plans to challenge two records – the one hour uphill and, in the summer, beat her own record up the Stelvio Pass. She also plans to start gravel racing properly, ‘I did a couple last year and absolutely loved it!


Find out more info about the FLIP sports pack

Our BLACKBIRD glasses are now sold out – sorry