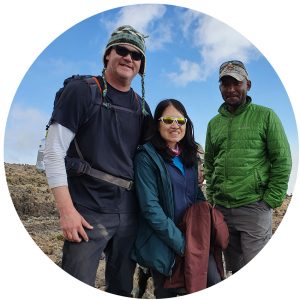 Less than a year into blogging, the married couple began to get invited by tour operators on short trips. Sailing, off-roading, rock-climbing in Portugal, and hiking and camel-riding in Morocco were some of their early experiences. Over the years, the adventures became more ambitious, including a one-week trip to Bhutan, promoting a local travel agency. “The short hike up to Tiger’s Nest, at around 3,100m, will stay with me forever, an almost mythical experience,” Ellie says.

In 2021, the two bloggers started to seriously get into hiking. They would often spend several weekends in a row up in Scotland, the Lake or Peak District, and, in Stefan’s case, doing some packrafting and rock-climbing in Wales.

It was around this time, that the pair decided they needed to get some proper, high-quality, prescription sports glasses and sunglasses. One of Stefan’s climbing buddies recommended Optilabs. Considering that the recommendation came from someone he entrusted with his life while dangling on the end of a rope, Stefan followed the advice! Both bloggers purchased our Rascal sports glasses. In Stefan’s case, he chose a pair with grey polarised lenses to combat high light levels, and a pair with clear lenses for low light and dark conditions.

Since then, Ellie and Stefan have tested the glasses to the max – including an incredible Everest Base Camp trek in April 2022 and an attempt to climb Kilimanjaro, Africa’s tallest mountain (5,895m), in September 2022.

“Our Everest Base Camp trek was so much fun and exceeded all our expectations. Kilamanjaro was another amazing adventure but things didn’t quite go to plan. Ellie was struck down by a bad cold and had to abandon the attempt on Day 4, while I continued onwards.”

“When my guide and I, reached Kilimanjaro Base Camp at 4,673m, it was unexpectedly ‘warm’, around -5C. You get up at 11:30pm, then start the summit push at around 00:30am. Your headlight is switched on up the steep, rocky incline, but it’s quite intimidating at first. The temperatures gradually got lower. For the first two hours, I felt in top shape, I could’ve gone much faster. But then high-altitude sickness hit me like a brick. In the end I was taking three very slow steps, then stopping for a few seconds, to breathe, another three steps, stopping, and so on. When we reached Stella Point at 5,765m, in clear view of the summit, we decided to call it a day. Still, one of the best days of my life. Standing on the crater rim, looking back down onto the soft carpet of clouds surrounding the mountain, was an out-of-this-world experience to me.”

Stefan says that his Optilabs sports glasses and sunglasses were a real asset. “They were extremely comfortable to wear, even in those harsh conditions. They are also very sturdy, and scratch-resistant, which is what you need. At those high altitudes, the intensity of the UV radiation from sunlight is up to six times higher than at sea-level. Knowing that we had high quality UV protection incorporated in our very robust Optilabs sports glasses, was a huge relief.”

On other occasions, Stefan has tested the glasses doing some motocrossing, buggy-racing, quad-biking, mountain-biking, open-water, long-distance swimming (breast-stroke of course), white-water paddleboarding, kayaking, canyoning, and jetskiing, to name just a few. Perhaps the biggest challenge so far, though, was caving.

Together, the travel couple spent two days exploring caves in the Yorkshire Dales in February this year and Stefan recently dived through Sump 1 at Swildon’s Hole in Somerset. A sump is a passageway that is completely submerged in water. In this case, the distance to dive through, was only two metres.

“You are some 100m underground, a lengthy, two-hour climb through tight sections, down waterfalls and cliffs behind you, sitting in this tiny chamber with a puddle on one side, and a rock wall on the other. You can’t properly see it, but you’ve been told that there is a very tight hole beneath the water surface, which leads to another chamber, on the other side. It was a frightening prospect, but, in the end, I just had to grab the rope and pull myself through.

“It might seem strange, after our trips to Everest Base Camp and Kilimanjaro, that I would say caving is probably the biggest challenge for my glasses. However, underground, you’ve got a myriad of particles in the air, and dirt, mud and rocks everywhere. You traverse through subterranean waterfalls and risk debris hitting you from above. And then, of course, there’s diving through that sump.”

He continues, “I’ve worn my Optilabs glasses on every one of my 8 potholing trips so far, and they’ve never been less than perfect. I’ve worn some type of sports glasses since the age of 12, and I’ve never truly been happy with any of them. Either they scratched very easily, the vision was not 100% right, or they were uncomfortable. Something was always wrong with them. Optilabs have delivered, on all fronts, and I can’t recommend them highly enough. I wear my sports glasses all day, every day, unless I have an important business meeting, in which case I replace them with my ‘office glasses’ for an hour or two.”

Ellie and Stefan, continue to wear their Rascal glasses and sunglasses but are excited to try out our new Cirrus and Edge frames for their next adventures.